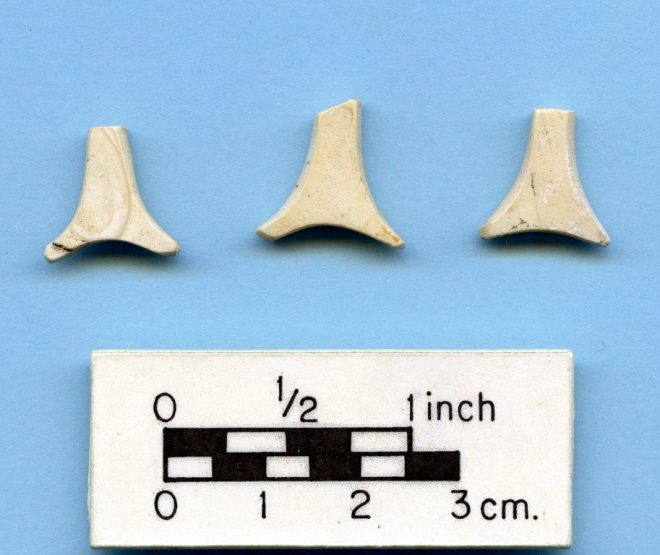 Paul Huey: “A few days ago I found three beautifully made beads, from conch shell.  They have very small holes and are triangular in shape but with the sides of the triangle pushed in.  Have you seen beads like that?

These beads are very finely finished and have very small holes through them.  Would you classify these as wampum beads?  Have you seen this shape before?  The only other examples of beads of this shape that I have documented is one excavated at Fort Odanak, an Abenaki site of ca. 1705 to 1759 in Canada.  It is made of red slate, however.

If this shape of bead is Canadian, that would be important, because the Schuylers at the Flatts farm were often accused of illegally trading with the French.”

Jim Bradley responds: “In terms of your tri-concave shell beads, yes, they are a well-recognized style.  I can discuss this with you in more detail but the short version is that they become common during the last decade of the 17th century and continue in use up to the Revolution.  There are several examples from the [Onondaga Iroquois] Pen site (ca. 1697-1705).  These, like wampum, pipe beads, and shell gorgets, were a commodity produced specifically for the Indian trade in the Great Lakes and farther west, and probably made primarily in the region between NYC and the Delmarva.  What is interesting is the evidence that shell was also being made into objects that could be sold or traded at Crown Point.  But then, what else were soldiers likely to be doing in their spare time?  Lots more to discuss on this.”